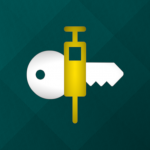 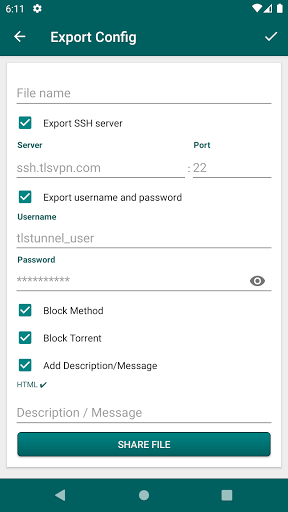 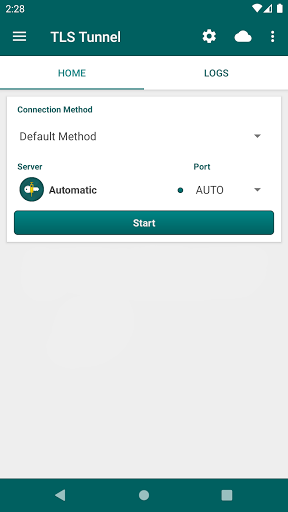 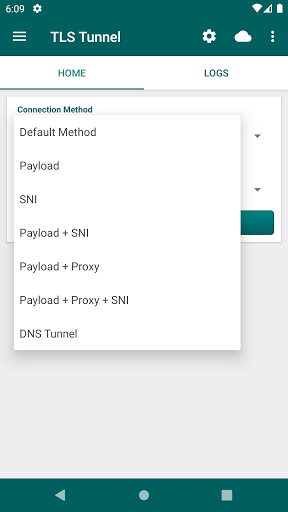 TLS Tunnel is a free VPN that aims to cross barriers imposed by internet providers and governments, and to guarantee privacy, freedom and anonymity to users.
The available official servers use a proprietary protocol that we call TLSVPN, it is a simple protocol that protects the connection using TLS 1.3 (and TLS 1.2 optionally), the same used in HTTPS sites, with a self-signed certificate verified at the time of connection to avoid interception.

To use it, no registration or payment is required, just a functional internet connection or knowledge to go through your provider’s restrictions in case your access is blocked.
It is also possible to use your own server through SSH, (Private Server option), in the standard method using port 22 (SSH standard), or with connection text and SNI if the server is prepared to receive these types of connections.

The official servers allow the passage of any IPv4 protocol, whereas the SSH connection of private servers allows only the passage of TCP, UDP will only be possible on private servers if the server is running any UDP Gateway such as badvpn-udpgw, without the connection UDP, you will not be able to play some games online or access some services.
The official servers also allow you to communicate with other users connected to the same server through the generated IP, your IP will be accessible by other users and you will also be able to access other users, by default this is disabled to avoid security problems.

Remember that TLS Tunnel is completely free, but with the Private Server option, if you don’t have your own server, you can pay to have access to third party servers, keep in mind that TLS Tunnel is not responsible for private servers, so in case of problems with private servers, contact the server owner.
The connection process is now unique and is reused for reconnections without restarting the service.
Now during reconnections the network will be blocked until the VPN is re-established or stopped by the user, this prevents IP leakage in case of sudden connection drop
Automatic reconnections will also be delayed by +1 second per attempt until the connection is re-established or the user stops the service.
Plus some minor improvements and bug fixes.