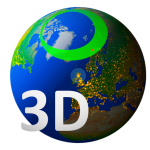 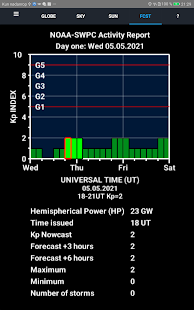 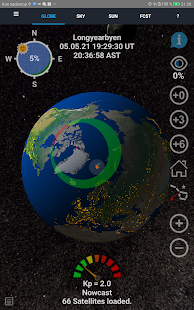 The Aurora Forecast 3D is a tool to track down where the aurora is located in the sky from any location on planet. It renders Earth in 3D with rotation and scaling at your fingertips. You can select locations and make your own ground – station list. The Sun illuminates the globe as it updates in near real-time. The short term forecasts are up to +6 hours, while the long term forecasts are up to 3 days ahead in time. They are updated when the app is active and connected to internet.

An Aurora Compass is included that shows where the auroral oval [1,2], the Moon and the Sun are located as you look up at the sky from your location. The phase and age of the Moon is also visualized in the compass. By zooming out in the 3D view port, satellites, stars and planets appear in their orbits [3] around the Sun.